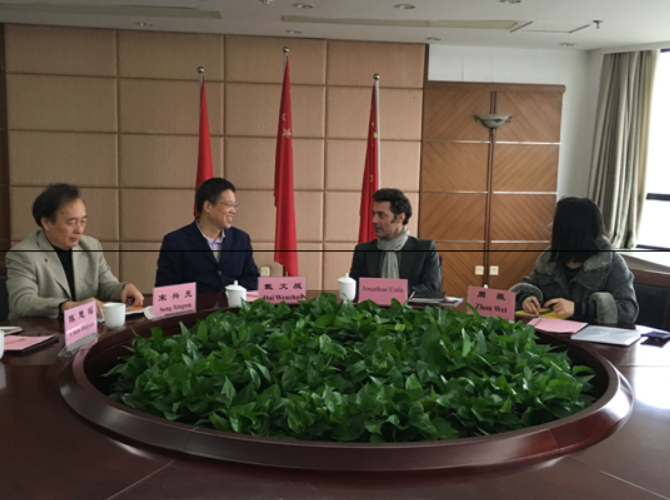 On the afternoon of November 18th, Dai Wenzhan, Vice President of ZJSU met with Mr. Jonathan Unlu, the French Director of Alliance France. Directors of International Office also attended the meeting.
At first, Dai Wenzhan, on behalf of ZJSU, expressed sincere sympathy to the terrorist attack in Paris. Mr. Unlu reported the achievements of Alliance France made since he took office last year. He said that there were breakthroughs in the number of students, types of French courses and cultural activities. He also looked to the future with confidence and expressed that they believe they will make Alliance France better. Dai fully confirmed the achievements they made since Mr. Unlu took in charge last year. He showed the school’s support to Alliance France and hoped Alliance France could play a greater link role and conducted more exchanges with higher level and better results, making contributions to educational internationalization of ZJSU.

Zhejiang Gong Shang University is the only partner of Alliance France in Zhejiang. Since its foundation, enrollment of students has surpassed 7200. At present, Alliance France has become the largest French training institution and the most important Sino- French exchange center in Zhejiang Province. In 2015, the courses it offers can be divided to 11 types with total number of 51 classes including intensive class, common class and one-on-one class. In the past one year, Alliance France of ZJSU has conducted a series of cultural activities including French movie appreciations, art exhibitions, music concerts, open days, lectures and public classes, etc., appealing to many people who are interested in French culture and exerting a good influence on improving reputation of ZJSU.